The Good Dinosaur – Watch Trailer
How Does Pixar Do It?

Are you a fan of animated film?  If so, get ready.  The team at Pixar who created Finding Nemo has a new one coming your way in two weeks — The Good Dinosaur.

The Good Dinosaur is Pixar’s 16th film.  The previous 15 have all been #1 box office hits.  They have earned scores of Oscars for technical and artistic achievement and billions at the box office.

HOW DOES PIXAR DO IT?

It begs the question: how does Pixar do it?  How did they become a creative juggernaut of the first order?  POLLY LaBARRE talked about Pixar and the link between their powerful organizational culture and innovation in a talk last month.  The organizational culture at Pixar, she said, is committed to building an environment and systems for work that create maximum creativity, collaboration, and productive learning.   It’s as important to them as creating their beautiful films.  Pixar is driven by a singular question: how do you do art as a team sport? The byproduct of that effort inspires an outpouring of imagination, initiative, and passion.

Here’s the video clip from the talk I mentioned where Polly talks in detail about the link between Pixar’s powerful organizational culture and innovation.  Some really fun ideas here – what an inspiring place to work.  Please take a look: 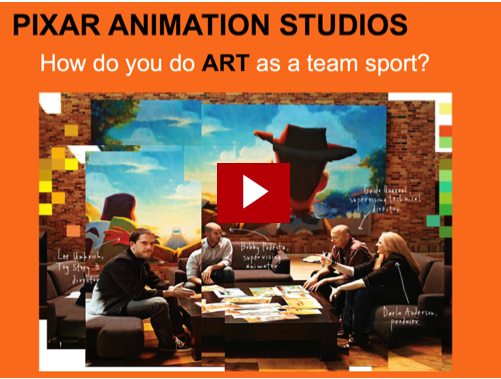 POLLY LABARRE – A STORYTELLER ON ORGANIZATIONAL CULTURES THAT ROCK!

Polly LaBarre has been helping leaders and organizations› understand the link between organizational culture and innovation since the founding days at Fast Company magazine.  She has a passion for helping leaders and organizations find ways to engage/inspire their people and create a powerful organizational culture. The idea is to create an environment where people freely bring their best to work every single day.  Pixar may be one of the more visible examples Polly cites – but there are so many others as well – the world is filled with mavericks who find new ways to rock the boat without tipping it over.  As a keynote speaker, Polly is a storyteller of the first order and a remarkable addition to any conference agenda.