The newest book by legendary investigative reporter BOB WOODWARD was released on September 15th and debuted at #1 on the non-fiction bestseller list. RAGE is Woodward’s 20th bestseller and becomes the 14th to reach #1 – more than any other non-fiction author.

A BOOK NAMED BY THE PRESIDENT

RAGE, like Woodward’s previous book about the Trump presidency, FEAR, was named by Trump himself. Back in 2016, Woodward and Robert Costa sat with then candidate Trump for a lengthy interview. Woodward contended that 'a lot of angst and rage and distress' was present in the Republican Party to which Trump replied, "I bring rage out. I do bring rage out. I always have... I don't know if that's an asset or a liability, but whatever it is, I do.”

Bob Woodward was unable to interview President Trump for FEAR. President Trump was intent on making certain Woodward had access this time. In all, Woodward had 19 on-the-record conversations with the president. Over seven volatile months, the interviews - all recorded - provided an utterly vivid window into Trump’s mind. The president provided a self-portrait that is part denial and part combative interchange mixed with surprising moments of doubt as he glimpses the perils in the presidency and what he calls the “dynamite behind every door.” About the recordings, Woodward said, "The microphone is like a microscope – when you hear the voice, it’s much larger than what’s on the page.”

The book also is built on "hundreds of hours of interviews with firsthand witnesses, as well as participants' notes, emails, diaries, calendars and confidential documents."

The book’s launch was preceded by Woodward’s appearance 60 Minutes. Other interviews followed – television, radio, and print. Links to several are below: 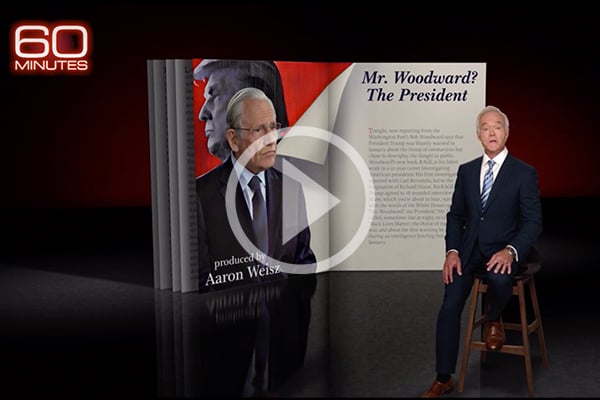 TAKES READERS INSIDE THE OVAL OFFICE

In dramatic detail, Woodward takes readers into the Oval Office as Trump’s head pops up when he is told in January 2020 that the pandemic could reach the scale of the 1918 Spanish Flu that killed 675,000 Americans.

At key decision points, Rage shows how Trump’s responses to the crises of 2020 were rooted in the instincts, habits and style he developed during his first three years as president.

Revisiting the earliest days of the Trump presidency, Rage reveals how Secretary of Defense James Mattis, Secretary of State Rex Tillerson and Director of National Intelligence Dan Coats struggled to keep the country safe as the president dismantled any semblance of collegial national security decision making.

Woodward obtained 25 never-before-seen personal letters exchanged between Trump and North Korean leader Kim Jong Un, who describes the bond between the two leaders as out of a “fantasy film.” 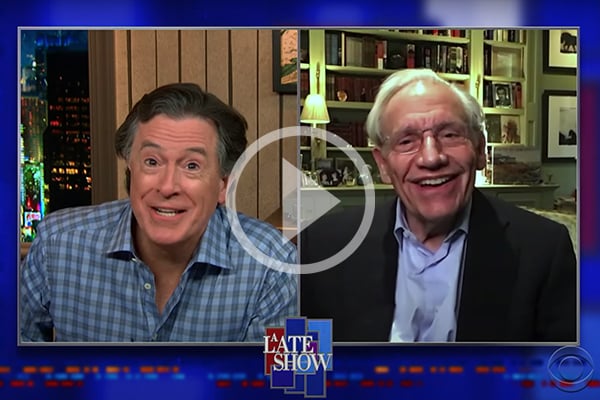 BOB WOODWARD ON THE LATE SHOW WITH STEPHEN COLBERT
(BEGINS AT  15:40)

All presidents face defining moments, but the Covid-19 presented unique challenges to this administration. How has the crisis been handled? What lies ahead? What has Trump’s leadership meant for America and the global condition – economically, socially, and politically? And what about the upcoming election?

In the president's final call to Woodward on August 14th, he asked Woodward to include the August peace agreement between Israel and the United Arab Emirates. But RAGE was already off to the press. Woodward took the opportunity to level with the president.

This is a transcript from “60 Minutes” -

Bob Woodward: "And I said, 'It's a tough book. There are going to be things that you are not gonna like, judgments that I made.'"

Audio of President Trump: "[I]t looks like I don't have it on this book, but we'll get you sometime later, I guess."

Audio of Woodward: "It's tough, sir. Thank you very much."

Woodward: "An hour-and-a-half later, he tweeted out that the Bob Woodward book is gonna be fake."

Throughout his career, Woodward has been careful to never make judgments with his reporting.  But he did so at the end of this book. Woodward stated that Donald Trump is “the wrong man for the job.” He told Scott Pelley on “60 Minutes” that Trump “…could not rise to the occasion and tell the truth about the virus” and that he based his judgment “on the evidence.” 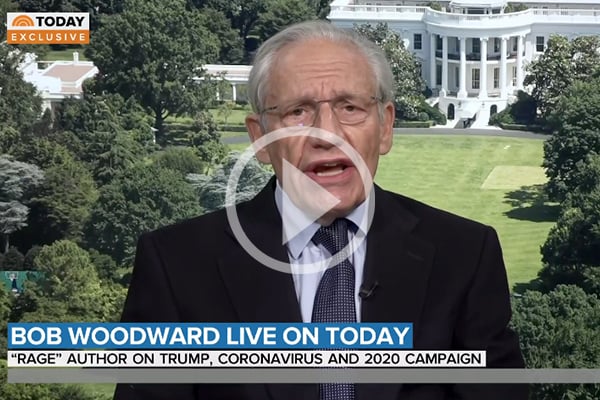 The work of investigative reporting is excavation. If I have learned anything from talking with Bob Woodward about his craft over the years, it's that investigative journalism is hard work. Stories never present themselves in their entirety - nice and neat. It's an obvious point, I think, but worth making for the sake of what follows here.

When Woodward met with the president in early February, he told Woodward that this flu was far worse than your average flu - and that it was transmitted through the air. When the book came out, there were some who said Woodward should have come forward when he had information about the seriousness of the crisis back in February. But in that February conversation, Woodward believed the president was talking about the virus in China because he'd just talked to China President Xi the night before and was telling Woodward about it. It was not until May that Woodward discovered the Oval Office meeting at the end of  in January that the president had with his national security adviser and others. "That is the moment when the people who know the most tell the President of the United States that we have a pandemic coming - it's gonna be like the 1918 Spanish Flu that killed 675,000 people in this country," said Woodward on his Colbert appearance last night.

News of that January meeting was a missing piece of information that provided context that was not available before.

Understandably, the release of RAGE has sparked great interest from event organizers looking for BOB WOODWARD to speak virtually at their conferences and meetings. It’s important to note that in addition to speaking about the president, Woodward can address the evolution of the office of the presidency, the men who have held that it, and the state of journalism in the internet age.