Watergate reporter Bob Woodward: back to basics for new book on Trump

On September 11th, the 19th book by legendary investigative journalist Bob Woodward will be released. Fear: Trump in the White House is the inside story of President Trump as only Bob Woodward can tell it.

I thought this would be a good time to put the new book and Bob Woodward into perspective.

The title of the book comes from Donald Trump’s own words. When Woodward and colleague Robert Costa interviewed then-candidate Donald Trump on March 31, 2016 at the Trump International Hotel in Washington D.C., the soon-to-be-elected president was asked to comment on this quote by President Obama: “The notion that Russia is somehow in a stronger position now in Syria and Ukraine than they were before they invaded Ukraine or before he had to deploy military forces in Syria is to fundamentally misunderstand the nature of power in foreign affairs. Real power means you can get what you want without having to exert violence.” They asked, do you agree? Donald Trump’s reply was, “I think there’s a certain truth to that. Real power is through respect. Real power is, I don’t even want to use the word, fear.”

Back to investigative journalism basics

In his landmark online investigative journalism course for MasterClass, Bob Woodward is critical of journalism in the internet age where the focus is on the rush-to-publish and where the face-to-face element has been all but abandoned. “With what I do, I have the luxury of time,” he says.

Knocking on a general’s door without an appointment

The thing that excited Woodward about this new book was the idea of going back to his Watergate roots: knocking on doors unannounced at a late evening hour and then spending 'til the wee hours interviewing a key source capable of giving him another piece to the puzzle of what’s really going on in the administration. "It's going to be a killer," said one former administration official, "Everyone talked with Woodward."

As for the challenge of getting the story right, "Everyone has their own version of the truth,” he says in the MasterClass course, “but there are facts.” Uncovering those facts is hard work and it takes time. For Fear, Woodward relies on lessons learned investigating his previous books.

Robert Gates, former director of the CIA and secretary of defense, said in 2014 that he wished he’d recruited Woodward into the CIA, saying of Woodward, “He has an extraordinary ability to get otherwise reasonable adults to spill [their] guts to him…his ability to get people to talk about stuff they shouldn’t be talking about is just extraordinary and may be unique.”

Therein lays the genius of Bob Woodward – an icon of journalism who gained international attention when he and Carl Bernstein broke the deeply disturbing news of the Watergate scandal. The book they wrote – All the President’s Men – won a Pulitzer Prize.

One of Woodward’s classic techniques for getting information is to ask a question and then just, he says, “shut-up and let the silence suck out the truth.” That was advice given to him by a former CIA official and it’s an important part of his work.

Uncover the facts and let the story speak for itself

Early on, some people thought Woodward was a Democrat by the way he went after the story of Watergate. But time and again since, Woodward has proven to be as dogged in covering the secret government of Democratic and Republican presidents alike.

A great example is from 2011 when Woodward was working on a book chronicling President Barack Obama’s debt-ceiling negotiations. At a meeting in Press Secretary Jay Carney’s White House office, Woodward pulled out a secret memo written by Peter Orszag, the former budget director. It held potentially damaging revelations about the administration. Participating in his project, Woodward said, would give people like Carney the opportunity to respond to such memos. Woodward then pointed to a safe that is kept in the press secretary’s office, which holds classified documents. “I’d like access to everything, including what’s in there,” he said, “some of which I might have already.”

The impression he left on the people in the room that day, according to a person familiar with the episode, was that they didn’t have much of a choice: Woodward knew everything, and if you didn’t participate, you were screwed.

For Fear, Woodward draws on hundreds of hours of recordings with firsthand White House sources all meticulously detailed – from Oval Office to Air Force One to the Situation Room, and beyond – backed up with files, personal diaries, contemporaneous meeting notes, memos, emails, and more. The result is “the most acute and penetrating portrait of a sitting president ever published during the first years of an administration,” according to Jonathan Karp, president and publisher of Simon & Schuster. The book reveals in unprecedented detail the harrowing life inside Donald Trump’s White House and how the president makes decisions on major foreign and domestic policies.

What drives Bob Woodward is simple: a relentless search for the best obtainable version of the truth. He has been critical of many journalists today who he says are becoming unhinged and are making their reporting of Trump personal.

Sometimes the story is not what you think

It’s stunning to think that Woodward has written so exhaustively about 20% of American presidents in the last five decades. He has a unique historical perspective on how the role of the presidency has evolved and expanded. It allows him to provide a rich and valuable examination of the presidency of Donald Trump.

Sampling of media attention for Fear 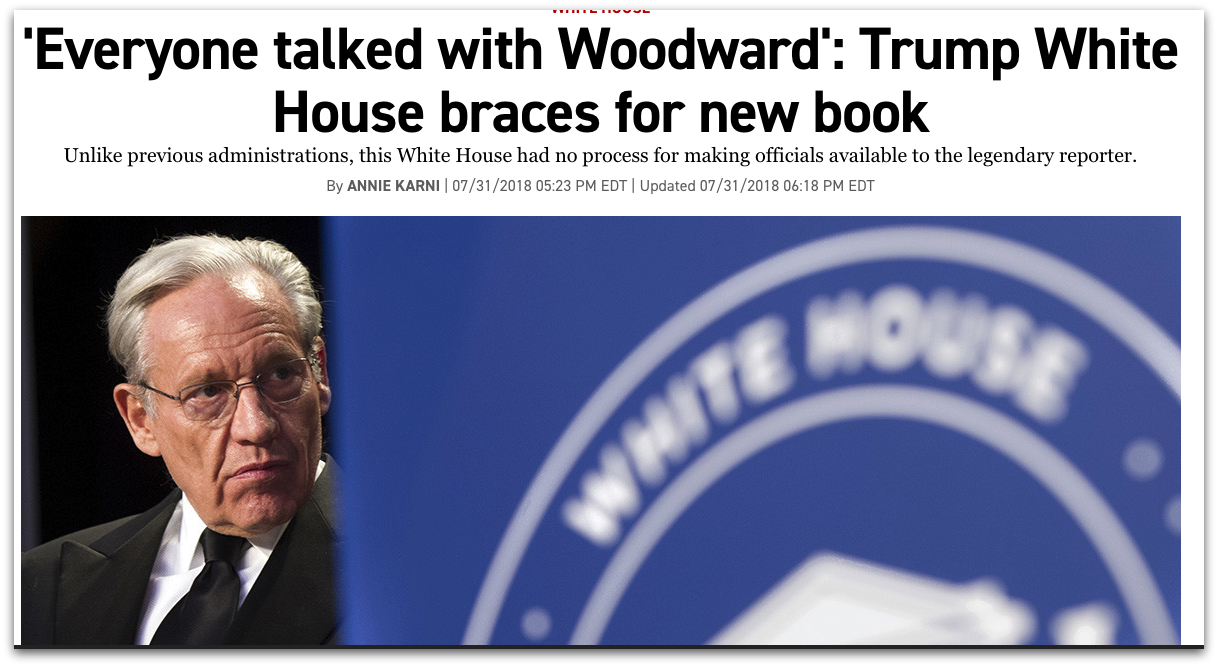 Read Politico announcement of the book

Speaking on "The State of the American Presidency"

Everywhere legendary journalist Bob Woodward goes, he says people ask to know what’s really going on in Washington. Their questions fall into four categories: 1) The presidency: How is President Trump doing and surviving? How does Trump compare with the eight presidents – Nixon to Obama – that Woodward has reported on for The Washington Post and in his bestselling books? 2) The investigation of special counsel Robert Mueller: is it like Watergate or will it fade away like Reagan's Iran-Contra scandal? 3) Conflict: What is the likelihood of a new war? What are the goals with North Korea, in the Middle East, with the Islamic state, and on terrorism? Will there likely be a major escalation in one of the current conflicts? And 4) The economy: Is the American/global economy sound or are we headed for trouble? How is Trump’s America First agenda playing out with our allies and enemies around the globe?

These are the themes Bob Woodward addresses when he speaks to audiences around the world.