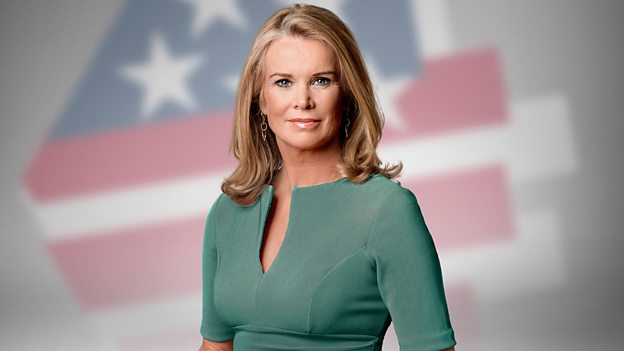 Option B: How Getting Fired Made My Career - Katty Kay

This post originally, written by Katty Kay , originally appeared on LinkedIn Pulse. It was published on April 25th, 2017 as part of series on resilience for Option B by Sheryl Sandberg and Adam Grant.

It wasn't that I wasn't good at my job, he assured me, it was just that I didn't have much personality.

That was when I realized I was being fired.

The anchor who was going to replace me, my boss said, simply had more on air character. It was apples and oranges really, he added, with all the bedside manner of limp fish.

To this day I'm not sure if I was the apple or the orange, but I do know you can't argue against being the wrong type of fruit. I was out, the new guy was in and my dreams of becoming a TV anchor were over.

I welled up. And to this day kick myself for doing so.

Katty Kay inspires women to take action — to go outside their comfort zones, to try new hard things, to take risks, to be prepared to fail and to discover the secret to success.

Invite Katty to speak at your next event.

It's a not a big story of loss. In the scheme of life, being moved aside from a job, however much you love it, is a small thing. I have been lucky, indescribably lucky. So much so that I almost hesitate to write it down for fear of jinxing my good fortune.

My four children are healthy, my husband is fit and well and my parents are still alive. I have not yet suffered the agony of losing a loved one - the death of my childhood hamster "Pig" doesn't really count.

But it will happen, I know. My parents are 84 and 86 and I have a constant nagging dread of that midnight phone call. I'm afraid of grief. Will I be up to bearing the pain? How do you cope, every hour? One day I will find out.

In the meantime my story of resilience is pedestrian. I am not sure I can even take from it many lessons for far greater challenges. But, for what it is worth, here is how I dealt with being fired and how it led to something better.

I cried again, properly this time, in private. Once I'd retreated to the safety of the lockable changing room, my humiliation poured out, wet and sniveling. It made it no easier that my replacement was a friend who genuinely felt bad about the change in roles.

I wish I could say I was angry. Who the hell was this man telling me I didn't have enough character? That I was a moldy apple or an insipid orange. Why didn't I thump the table and put up a fight? Was I really that meek?

But my overwhelming feeling was humiliation. Everyone would know, and talk about the fact that I'd failed. It would be breaking news in a newsroom full of 'who's up who's down' obsession.

In retrospect that was my second mistake (the first were those unprofessional tears.) I hadn't learned the lesson that none of us are other peoples' headlines for very long. People are far too wrapped up in their own lives to care about what's happening to other people. Even if it is a moment's hot gossip, it's only that, a moment.

Pride almost got me out the door in a swirl of indignation. I desperately wanted a chance to reclaim the upper hand by quitting, ideally in a huff. I'm not sure what I hoped that would achieve - somehow my employers would realize the error of their ways and come groveling, begging me to return? As if that was going to happen. They had made their calculations and their decision, a temper tantrum wasn't going to change that.

Fortunately, a quick dose of the kind of reality that only comes with a visit to the ATM made me realize quitting was not an option available to me, and my rather large family. I needed to pay the bills.

When the show's new editor offered me the job of political correspondent, I swallowed the temptation to tell him, and the network that had humiliated me, to fxxx off. I did say I needed some time to think about the offer, a small face saving measure.

SUPPLEMENTAL READING:
WOMEN AT WORK: WHY CONFIDENCE IS IMPORTANT AT WORK -
MORE THAN KNOW-HOW AND
WOMEN & CONFIDENCE: KATTY KAY SHARES INSIGHTS FROM THE CONFIDENCE CODE

Of course I took the job. I didn't have much choice and maybe sometimes that's a good thing. I wasn't thrilled but I did it.

And that's when something good happened, when failure became success. The year was 2007 and little did we know it but we were on the doorstep of one of the most exciting elections in history. Thanks to my new job, I got a front row seat. I crossed the country covering the race, first between Hillary Clinton and Barack Obama and then between Obama and McCain. It was the political story of a lifetime.

It turned out I was really good at it. The experience stretched me and I rose to the challenge. I exercised reporting muscles I hadn't used before, became confident and quicker and smarter. And, yes, I developed a stronger, more authoritative on air presence. My reporting was noticed, I got invited on US networks and my career took off.

And here's the kicker, none of this would have happened if I hadn't been fired. I would never have had the chance to do any of that reporting if I'd been stuck anchoring in the studio every night.

I'm not going to thank the man who told me I had no character. I'm not that magnanimous and he could do with lessons in people management. But I do realize something good came out of something bad and along the way I learned I can survive a setback. I hope that helps me in the future.

This post is part of a series on resilience for Option B by Sheryl Sandberg and Adam Grant.

The Power of Confidence: KATTY KAY - Turning Thoughts into Action 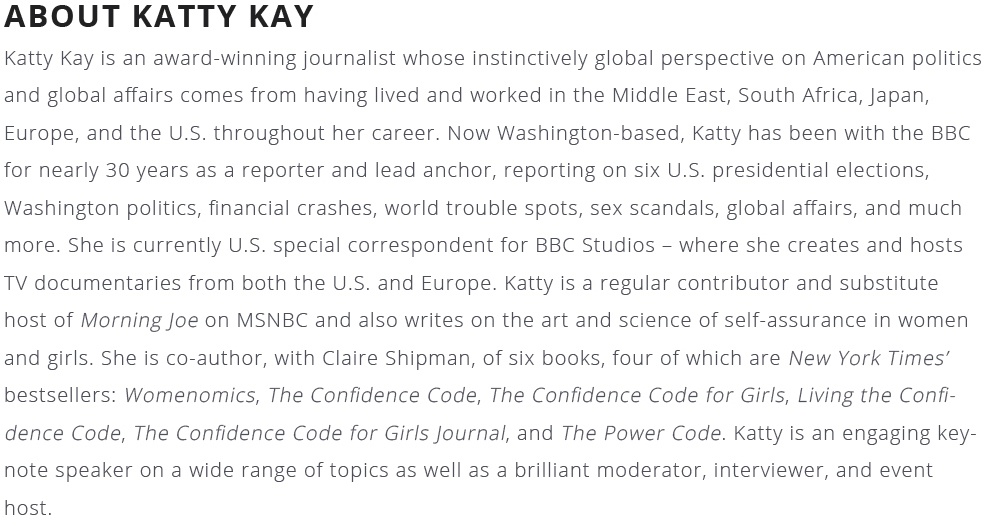 Based in Washington, D.C., KATTY KAY is lead anchor for BBC World News America. In America, she is seen on the nearly 300 Public Broadcasting Stations which carry her evening broadcasts. Katty’s reports on the latest U.S. economic and political news are also carried by BBC News channels globally, giving her a vast international viewing audience. Katty is also substitute co-host for MSNBC's "Morning Joe" program and a frequent guest on NBC's "Meet the Press." With her co-author Claire Shipman, Katty has written two New York Times bestselling books: The Confidence Code and Womenomics.