"Bill Walton is a national treasure," read one headline. "Walton was tapped for color commentary in Friday night’s White Sox broadcast and it was a treat for the senses," it went on to say.

The Chicago White Sox tried an experiment in the broadcast booth last weekend. Regular announcer Steve Stone was taking the weekend off and the team paired Jason Benetti with four guest broadcasters, one of which was basketball legend BILL WALTON. The decision was inspired because Bill Walton lit up the online universe - becoming the #1 trending topic on Twitter that evening.

Walton preceded his trip (no pun intended) to the broadcast booth with a pre-game talk to the team about the challenges of playing professional sports. It was uplifting advice from an icon who knows a thing or two on the ups and downs of a pro sports career. Bill then ambled up to the White Sox booth on the 50th anniversary of Woodstock, wearing extremely bright Sox branded tie dyed t-shirts with a mindset to match.

Benetti knew the kind of evening he was in for, having worked with Walton at the Maui Invitational Basketball Tournament for ESPN in the past. He gave Bill lots of room to be Bill.

With that the evening began and the headlines after the game said it all:

“…dazzles in the booth with electric commentary and enthusiasm.”

“Walton broadcast…was nothing short of brilliant.”

Here's a recap of some of Bill's best moments:

The NBA legend had so much fun in the booth and the media and baseball fans loved it, too. And then the online world was raving about Bill's broadcasting: 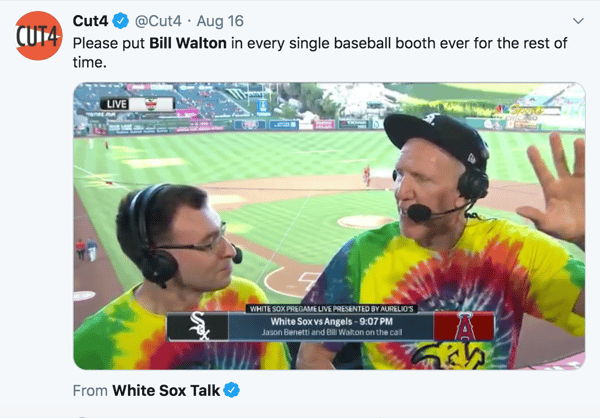 CNN's David Axelrod: "What better way to mark the 50th anniversary of Woodstock than to watch the always colorful @BillWalton do color commentary? ... Not many baseball insights but deep lessons for life!"

ESPN's Pat McAfee: "This man is my hero in the 'analyst' world. Hilarious, inspirational, and wildly insightful."

NBC Sports Chicago: "Walton is a National Treasure... but sometimes you have to play the outro music just to get him to stop speaking."

MLB's Cut4 account: "Please put Bill Walton in every single baseball booth ever for the rest of time."

THEN THE MEDIA WEIGHED IN

CHICAGO TRIBUNE:  Phil Rosenthal wrote the one-time pairing of Walton and Benetti "was a rush." The "weird energy and wild tangents more than lived up to the pregame buzz." It seems that no one "was more excited about Walton working the baseball game than Walton." Additionally, no one "was less concerned with his lack of expertise, either".

NBC SPORTS CHICAGO: Dan Santaromita noted after Mike Trout hit a home run, Walton "compared him to a fish." He said, "That’s Trout? Swimming upstream, avoiding all the flies and sending one ricocheting through the universe." Walton "didn’t stop the weird fun once the game started," and there were "plenty of Grateful Dead and Woodstock references on the broadcast".

YAHOO: Mark Townsend wrote thanks to Walton, what "would have been just another Friday night game in MLB was not only the talk of baseball, but the talk of all social media." There was "no actual baseball analysis," as Walton was just "delivering one philosophical musing after another." Even after nine innings, it "felt like we’d not yet scratched the outer surface of Walton’s mind".

It's important to remember that Bill Walton is a beloved sports icon who is as entertaining on stage as he is in the broadcast booth. Bill is a brilliant motivational speaker - inspiring audiences with lessons that will help them be their best in business and in life - subjects like leadership, teamwork, personal achievement, and more.

When it comes to his talks, you don’t have to be a sports fan to enjoy Bill Walton’s presentation. Just sit back and enjoy as the legendary Hall of Fame icon entertains and inspires. Here are a couple of samples:

In his speeches, Bill Walton inspires audiences. “Those not willing to risk going too far will never know how far they can go,” he says.

RISING TO THE CHALLENGE

WHAT GREAT COACHES TAUGHT ME ABOUT LEADERSHIP

CREATE A TEAM THAT ROCKS

MY 37 SURGERIES - A JOURNEY FROM INJURY TO RECOVERY